The Ultimate Guide to Sailiing Doodles

Here's Everything You Wanted To Know

This is the definitive guide on Sailing Doodles for 2023.

Over the last 21 months, I have personally watched 44 hours worth of Sailing Doodles episodes as one of their biggest fans.

(Yes, I really am *that* obsessed with Booby’s channel like you

➔ How Bobby afforded his boat

➔ How he makes his money today

➔ What boat he has have and its upgrades

➔ Who all the beautiful women are (and how does he find them?!)

➔ How you can start crossing oceans

Is it just me…or does Bobby look like Zach Galifianakis from The Hangover?

Taylor Francis (age 27) was previously on Doodles and was recently featured on SV Delos. She recently bought her own yacht which is a 1994 Catalina Morgan 38 called Mary M, with plans to sail to Mexico, so it’s unlikely she will return.

Bobby and Taylor from Sailing Doodles were never a couple. They remained as friends only, though may have had an off-camera relationship.

Laura (LaLa Libra) was on board as Bobby’s partner but after the breakup, she left and eventually married. She is now a mom with two girls of her own with her full name now being Laura Peters, while she used the name Laura Libra on Sailing Doodles.

I was able to find full names of ex-crew members including Megan Finley and Amanda Wojtas. Each was featured in past episodes yet none of which were married to Bobby, and have moved on.

Stephanie, Tess and Geraldine are the latest girls to join the boat in Asia, with much praise of loyal fans.

The Sailing Doodles dog, Maverick, unfortunately passed away in early February, 2020 due to cancer.

Bobby previously owned a 50-foot Beneteau yacht but no longer sails. Instead, he owns a 1997 Hatteras 60 Motoryacht which he cruises on.

However, his channel doesn’t focus on renovations. Instead, he choses to focus on the near-naked women featured as guests. And the dogs.

Sailing Doodles are currently in Mexico.

Bobby has sailed briefly in

Unlike other channels, he prefers coastal cruising instead of circumnavigations.

They have recently arrived in Europe and aim to sail the Mediterranean.

Bobby had some cashed saved up before buying his first sail boat for just $24,000 plus an additional $4,000 in upgrades.

He has owned an additional 2 boats since through wise investments and YouTube income.

He previously worked as a commercial pilot, and typically flew guests on private jets.

YouTubers are becoming wealthier by the day.

This is based on the value of his boat, online business and stock portfolio.

This is earned from the following sources:

➔ Various brand sponsorships such as Butcherbox and Babbel

➔ Paid crew members who join in the journey

➔ Sales of the Zero to Hero online sailing course

Sailing Doodles had previously featured Taylor’s Travels which was very favouable to the audience.

Laura (LaLa Libra) has also been on board for an extensive time but Laura’s last name is unknown. Her name ‘Laura’ may be a pseudonym as many OnlyFans creators don’t use their real name.

MJ Sailing were also featured briefly in one episode.

The biggest moments in Sailing Doodles history are:

➔ Crashing his boats on the rocks

➔ Being boarded by the coastguard

➔ Getting kicked off an island

➔ And of course, many beautiful women on board

Sadly, Bobby lost his dad recently (R.I.P.) although his mum is still alive and has been featured in some episodes.

Sailing Doodles aims to continue cruising in the same grounds with more women on board.

He’s already back in the Carribean and editing his older videos ready for YouTube and Patreon.

While I’m not the biggest fan of Bobby’s approach, it’s clear that the clickbait (beautiful women in thumbnails) works to generate millions of views to his YouTube channel.

Similarly, there are thousands of searches on Google each month for nude/uncensored photos of Laura and Megan by middle-aged men late at night.

It’s also evident that we don’t need to do a circumnavigation to have an epic time on the water.

Bobby from Sailing Doodles suffered a near-death experience and used that time to re-evaluate his life choices. From there, he started sailing and never looked back simply using the resources he had.

So instead of waiting for your own health-scare, perhaps now is the time to build your own freedom-based opportunity to go cruising.

Like that old saying goes “Build your water well before you need a drink”. 🙂 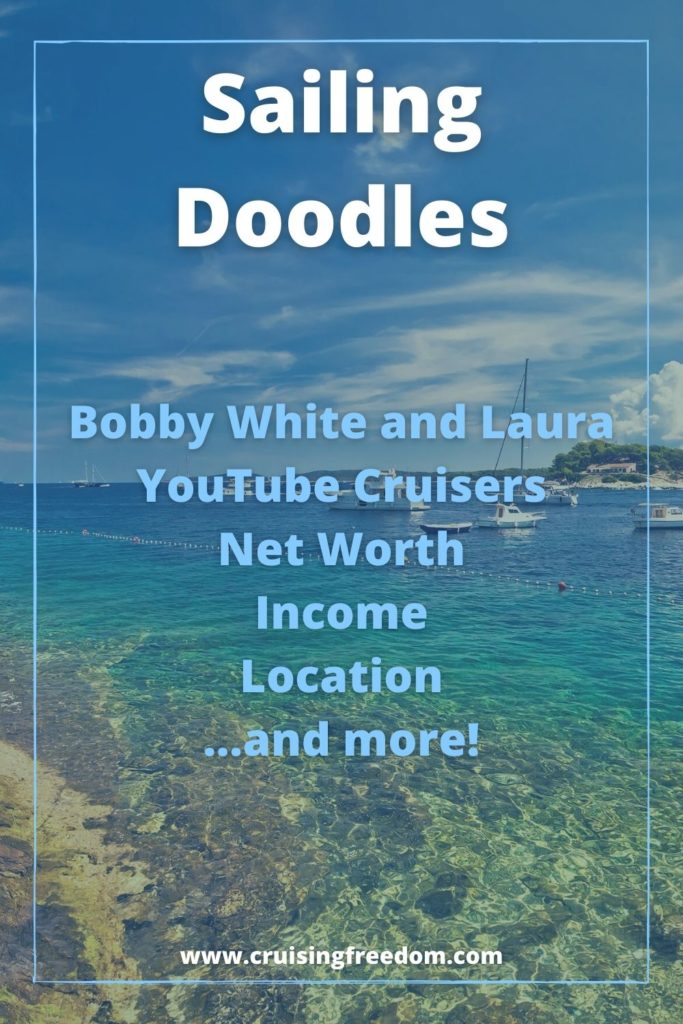 Bobby is living the dream today and it’s one attainable by most people.