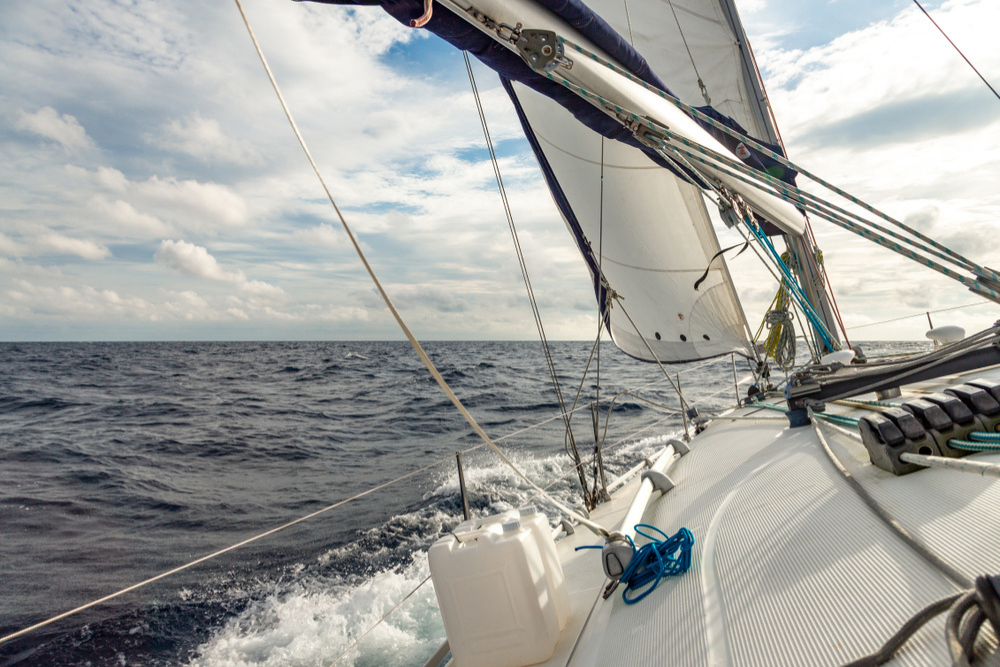 Sailing across the Atlantic is one of the best adventures that any one of us can encounter, yet you need to do a lot of planning to make it both a safe and comfortable crossing.

It takes up to 21 days to sail across the Atlantic, and these approximate sailing times needed for individual segments:

You can expect a mixture of calm and relatively flat water all the way up to 5-foot swells.

Now, are these distances precise? Of course not! As any truly experienced sailor would know, it comes down to many variations, such as:

1. Your Boat Type and Sail Plan

We’ve heard of some Outremers and Sailwinds doing the entire crossing in a little over 2 weeks. Some professional racing teams can certainly make this trip in under 2 weeks, but a production/charter catamaran with beamy hulls is going to take several weeks at least.

2. You Get A Solid Weather Window

Planning your voyage before you depart from any of these ports should be at the top of your priority list. I’ve heard of sailors waiting weeks for the right weather window, even in the better times of year. Like they always say “Keeping a schedule is your worst enemy…”

3. Currents and Time Of Year

The currents can play a huge role in either decreasing or increasing your boat speed and thereby impacting your crossing times. It’s not just the current either as wave direction can play a huge impact, as too the amount of wind.

It’s best to cross during the winter months where the trade winds are plentiful. This is November through to February. However, you can still cross the Atlantic at any time of year provided you’ve picked a great weather window prior and remember that it’ll be 3 to 5 days extra in those lighter wind conditions.

As I’ve touched on already, you’ll need to plan your route and provision your boat appropriately for the journey. This includes more water than you’ll consume (even if you have a water maker on board, as these can fail) plus food, spare parts and a consistent helm watch routine.

The Atlantic hurricane season starts in June and fizzles out in mid-November. This is when you’re far less likely to see other boats make this crossing unless they’re commercial vessels. In many instances, insurance policies won’t cover hurricane damage on personal yachts and catamarans which are sailed in hurricane season.

You can expect to tack and gybe multiple times on an Atlantic crossing. This is something best done during daylight hours to avoid any potential issues. During night watches, I recommend adding one reef into the mainsail to avoid any potential squalls. These are near-impossible to see even on a full-moon night.

You can always find a crew at either end of an Atlantic Crossing. From using Facebook groups to online forums such as CruisersForum, or even asking around at the local tourist hotspots, it’s pretty easy to find someone who wants a cheap ride and an adventure on the open seas.

Catch is though…you’ll want to find someone with experience for such a long crossing, a chances are too that you’ll paying a few bucks for this experience. Well worth it though, as a single-handed or 2-up crossing is tough work, even for those who have done ocean crossings before.

As a final thought: When you do land at your next port, aim to call head for a marina berth but always expect to anchor in the tourist months. Some of these anchorages can get real busy! Good thing we did the Atlantic crossing in a smaller yacht with a swing keel. 🙂