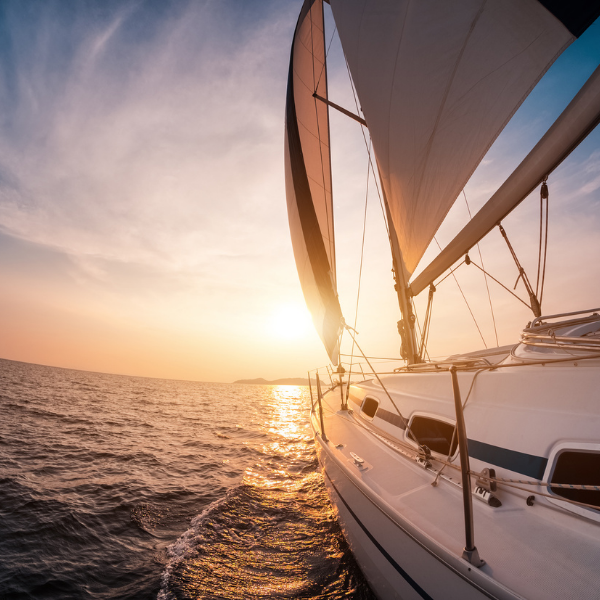 When life keeps you on dry land, let your mind sail away by watching the best sailing movies.

Whether it is overcoming massive challenges, dealing with the power struggles of crew members, or learning the meaning of persistence, these sailing movies can grab your attention and make you feel like you are on the water, too.

So you don’t waste a minute, here is a list of the 12 best sailing movies for your inner expedition.

Based on the classic novel written by Ernest Hemingway, The Old Man and the Sea is an adventure of a solo fisherman. Heading out to sea, old man Santiago catches the biggest fish of his life only to be tormented for days by sharks. By the time he makes it back to safety, he does not have much of his prized catch left to show.

A documentary about an open-ocean sailing competition, TRANSPAC, and the young sailors that are put to the test. Endurance, perseverance, and teamwork are the skills necessary to succeed at this adventure of a lifetime. Will they sink to the bottom or rise to the top? Watch this crew of fifteen learn to work together and build unbreakable bonds.

This highly acclaimed, Oscar-nominated film starring Robert Redford will keep you on the edge of your seat. As life-threatening challenges appear, including a damaged ship, broken navigation system, and a raging storm, this solo sailor comes face-to-face with his mortality.

In an attempt to survive, he must return to the basics of sailing and navigating the waters while carefully managing the shrinking supplies necessary for survival.

Have you ever held your breath while watching an intense movie? From the time you see the clouds roll in, The Perfect Storm will have you struggling to breathe. As a commercial fishing vessel faces turbulent waters and unforgiving waves, the future looks dim.

A stellar cast featuring George Clooney, Mark Wahlberg, and Diane Lane come together to bring this true story to life. It will have you asking yourself just how much a catch is really worth?

Do you have dreams of taking a solo voyage? Between Home is a documentary that follows such a voyage from Europe to Australia. Nick Jaffe was a young man who spent four years on a 26ft boat in the Atlantic and Pacific oceans – sailing more than 30,000 nautical miles.

With video footage both on and off the boat, you get an up-close and personal look at the feat. You will feel a sense of relief and pride as Jaffe reaches his destination and fulfils his dream.

If you are ready for one of the all-time best sailing stories, look no further. Imagine being on a basic raft-like vessel (Kon Tiki, named after an Inca god) facing a seemingly impossible journey from Peru to Tahiti. This journey would take a few months and nearly 4,300 miles. In 1947, this adventure meant solely following the stars and the currents while persevering through to the finish.

This historical drama is based on the real-life expedition of Thor Heyerdahl, a Norwegian scientist who sought to prove that colonization of Polynesia could have been done by American ancestors.

Jeff Bridges stars in this true story about the disaster faced by the Albatross ship that met its ill-fate in May of 1961. Full of teenage boys with a thirst for fun, adventure, and knowledge, the ship sets sail and, though there are power struggles, they begin to learn how to become true shipmates.

Then, the unthinkable happens. The boys are faced with a white squall storm that appeared out of nowhere. Will they have enough training and skill to survive the catastrophic storm?

Maiden is a sailing movie to empower young females. Based on the first-ever all-female crew to enter the Whitbread Round the World Race of 1989. The documentary follows the lead character, Tracy Edwards, as she grows from cook to skipper in the competitive arena. Something that was never heard of before.

Perhaps the only comedy selection on this list, Captain Ron is a lighthearted, quirky film that will have you laughing to the shore. Having inherited a yacht with little knowledge of sailing, a family hires an odd skipper to help them sail through the Caribbean. Pirates, faulty equipment, accidents, and more plague those onboard in an enjoyable, comedic sense.

In another empowering female film, sailor Laura Dekker heads out into the blue waters at the age of 14. Her dream? To sail the world. She leaves Holland and heads through the Atlantic and Pacific oceans alone. With much determination and grit, Dekker shows what it means to set a goal and crush it.

Many documentaries show sailors reaching their dreams. This one, however, shows just how fragile humans are under the power of the ocean.

Back in 1968, Donald Crowhurst was a businessman who decided to risk it all and compete in the Sunday Times Golden Globe Race. This one person, round-the-world race did not come without challenge – and Crowhurst faced many.

He chose to keep going despite everything. This is his story.

Love and adventure do not come without struggle. As a young couple sets sail in this film, their survival skills are tested when they confront a strong and deadly hurricane in open water. Adrift is the perfect mix of love, strength, loss, and resilience.

There is a sailing movie out there just waiting for you to watch right now. So when you find yourself spending too much time on dry land, spend time with some of these empowering women, dream catchers, strong men, and more who have all been changed by sailing.